Back to All News
Real Estate

Coconut Grove, a Miami Neighborhood That Feels Like a ‘Small Town With a Big-City Vibe’

Founded in 1873, it’s as intoxicating as its tropical-theme name. In the last three years, its residential and commercial markets have been undergoing a revitalization that has raised its profile.

“Coconut Grove,” the 1967 tune by The Lovin’ Spoonful, where “nothin’ matters/No mad, mad world and no mad hatters,” sums up its leave-your-worries-behind-and-be-happy appeal.

Coconut Grove is, indeed, the perfect place to go on permanent vacation: The lifestyle is laid back, the landscape is lush and the living is luxurious.

Coconut Grove is bounded by North Prospect Drive on the south; Le Jeune Road on the west; the South Dixie Highway, which is U.S. 1, and Rickenbacker Causeway on the north; and Biscayne Bay on the east.

For $650,000 to $750,000, buyers can enter the single-family market, according to Jill Penman, a global real estate adviser for ONE Sotheby’s International Realty. “This will get you a newer construction townhome or an older, smaller cottage or bungalow that’s about 1,500 square feet and that could be a teardown,” she said.

At the luxury end, non-waterfront properties command $1.5 million and higher, while waterfront estates, many of which are in gated communities, start at $5 million, she said. “There’s a piece of waterfront land that just sold for $10 million,” she added.

The record price for a waterfront estate, $34.6 million, was set in 2016 for the 1920s La Brisa estate. “It only sold for this high figure due to the land size of 300,000 square feet,” she said, adding that the buyer was Ransom Everglades High School, which is building a STEM center on part of the property. “That’s almost 43 average lot sizes in Coconut Grove.”

The highest price for a non-waterfront property, $8.1 million, was set in 2018, she said, adding that “it was for a new-construction house.”

Ms. Penman added that there also are pockets of townhouses, which are attractive to younger buyers “because you can’t find a single-family home that was built after 1999 or 2000 for less than $1.3 million to $1.4 million.”

“But most people moving to Coconut Grove want three bedrooms, so there is room for guests,” she said.

Plus, she said, “monthly maintenance fees are on the higher end because there are many amenities, including tennis courts and swimming pools.”

At the luxury level, the prices for three-bedroom condos typically range from $1.4 million in older buildings to $2.3 million to $2.5 million in newer developments, she said, adding that the units at Grove at Grand Bay, which opened in 2016, are priced at $2.6 million and above.

Annie de la Rosa, a real estate agent with Douglas Elliman, said that at the newest high-end condo development, One Park Grove, a trio of glass towers designed by starchitects OMA/Rem Koolhaas, the units are $2.7 million to $12.5 million. She added that these are record prices of $1,600 per square foot.

Coconut Grove is dominated by single-family residences, many of them built in the 1930s and ’40s.

“Everything is made of concrete,” Ms. Penman said. “And there are basically two styles—modern and Mediterranean. The new construction is modern.”

There are only a few condo developments. Yacht Harbour, which dates to 1975, has 138 units. The 425 units in the three high-rises at Grove Isle, a 20-acre island, were completed in 1982, the same year Grove Towers, which has 99 units, opened.

In 2016, the beginning of the neighborhood’s renaissance, they were joined by Grove at Grand Bay, a 22-story two-building development with 99 units. One Park Grove, the newest, has 72 units in its trio of towers. It will be completed early in 2020.

Ms. De la Rosa noted that “there are few A-class high-rises besides One Park Grove. Grove at Grand Bay is another standout in Coconut Grove’s skyline.”

What Makes It Unique

Coconut Grove, which Ms. Penman likens to a “small town with a big-city vibe,” has a strong sense of community.

Everyone gets to know everyone else, she said, because it’s a walkable neighborhood whose many parks, along with the beaches along the ocean, are natural gathering spots. “People stroll to the restaurants for dinner, and their children ride their bikes to school,” she said.

She added that it’s so walking friendly that “clients who are moving in don’t bring their cars.”

Coconut Grove, which is undergoing a development renaissance, has an influx of new dining and shopping options.

Several new restaurants are bringing in diners from all over Miami, Ms. De la Rosa said. They include Tigertail + Mary, a farm-to-table spot in the One Park Grove development that was opened by James Beard award-winning chef Michael Schwartz and that serves everything from New York strip steaks to suckling pig; and Bellini, the Italian restaurant in Coconut Grove’s new Mr. C Hotel that features rooftop dining.

“Bellini is Cipriani’s little sister,” Ms. Penman said. “It offers fine dining, great food—I like the fried fish, the veal parmesan, the salmon. Okay, I like everything—and great service. You can dress casually, and it’s on the fifth floor so there are beautiful views of the bay.”

Ms. De la Rosa noted that it’s the first hotel to open in several years. It was designed by the international architecture firm Arquitectonica, which is based in Coconut Grove.

Regatta Harbour, a new 100,000-square-foot retail development that will open in the first quarter of 2020, will have several restaurants, including Afishionado, the latest boat-to-table dining concept by Bravo “Top Chef” winner Jeremy Ford.

Those include Bombay Darbar, which serves traditional Indian dishes; Strada, the Italian mainstay that offers a selection of more than 100 wines; and Sapore di Mare, a small, intimate Italian seafood restaurant.

“In Coconut Grove, it’s not about being trendy or having brand names,” Ms. De la Rosa said. “It’s about food and comfort and quality.”

Aside from CocoWalk, there aren’t many places to shop in Coconut Grove. Residents head to The Shops at Merrick Park, which is a block away in Coral Gables, to browse and buy in uber-luxury brand-name stores like Nordstrom and Neiman Marcus.

“Better boutiques and shops are coming to Coconut Grove,” Ms. Penman said, “but it’s still a work in progress.”

There are, however, some popular local boutiques, including The Griffin, which sells luxury shoes and handbags; H&H Jewels, which has been selling diamond engagement rings, estate jewelry and watches for more than 30 years; and Ramona LaRue, which sells made-to-order art clothing for women.

Ms. De la Rosa said dining is the main form of nightlife in Coconut Grove and that those who desire bars, clubs and lounges head to South Beach, which is 15 to 20 minutes away, or to the downtown financial district, which is reachable in seven to 10 minutes.

Coconut Grove’s main cultural attractions include the Vizcaya Museum & Gardens, which has an early 20-century subtropical-style Italian villa with 34 decorated rooms and 10 acres of formal gardens that feature century-old plants.

The Kampong, a nine-acre botanical garden, “is very beautiful and park-like,” Ms. Penman said. “Private and gated, it’s on the bay and open by appointment.”

“The Coral Reef has one of the premier sailing centers in the country,” Ms. Penman said. 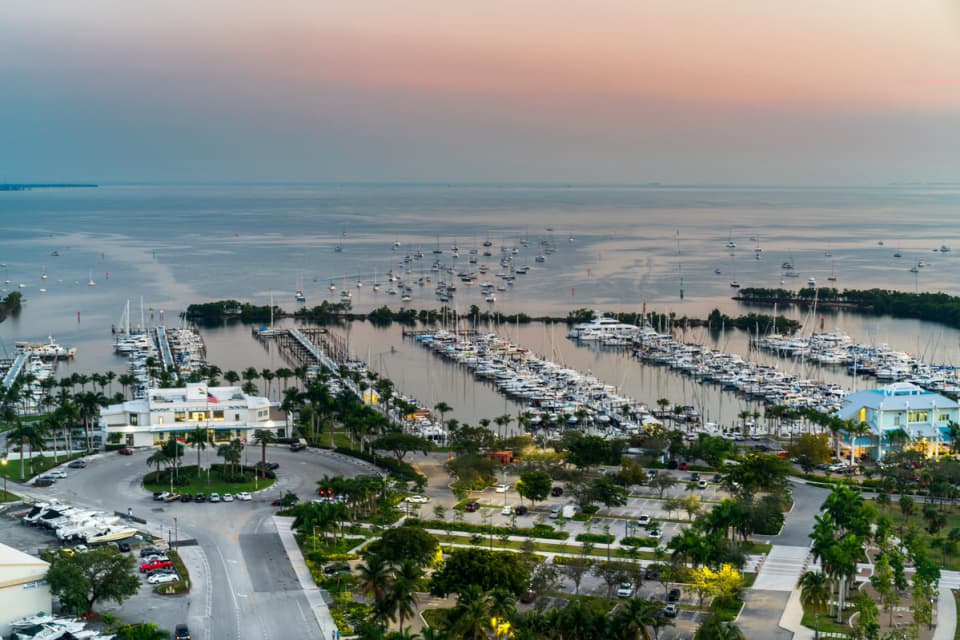 View of the marinas from a five-bedroom apartment in Grove at Grand Bay, a luxury residence in Coconut Grove, Miami.

View of the marinas from a five-bedroom apartment in Grove at Grand Bay, a luxury residence in Coconut Grove, Miami.ONE SOTHEBY’S INTERNATIONAL REALTY

The annual Coconut Grove Arts Festival, held on President’s Weekend in February, is one of the largest outdoor arts festivals in the country. Started in 1963, it features 300 artists and attracts some 120,000 visitors.

“The streets are blocked off, and local artists set up shop to show their paintings and sculptures,” Ms. De la Rosa said. “It’s a special fun time for the neighborhood, and it brings in people from other parts of Miami.”

Coconut Grove has more than a dozen green spaces, including Peacock Park, which covers 9.4 acres and has basketball courts, a softball field, two soccer fields, a children’s playground and a large open field suitable for a variety of sports, and the Barnacle Historic State Park, which has a 19-century home and replicas of two Victorian sailboats.

Coconut Grove’s seven private schools, according to Ms. Penman, are “the most premier and prestigious in Miami.”

The 300 students at St. Stephen’s Episcopal Day School, founded in 1958, are in pre-kindergarten through fifth grade. Carrollton School of the Sacred Heart, the only Catholic, all-girls Montessori-3 through Grade 12 college preparatory school in Florida, was established in 1961. The Coconut Grove Montessori School takes 18-month-old toddlers all the way through fifth grade. The Vanguard School, founded in 1968, offers individualized instruction for children who have learning disabilities or learning issues and average or above-average IQs.

Ms. Penman added that Coconut Grove Elementary, a public school, offers a French-language program for students in kindergarten through grade five. “It’s one of the best programs in that field,” she said. “People from France who are coming to Miami choose to live in Coconut Grove because of it.”

Some 75% of the residents live in Coconut Grove year-round, and the remainder are seasonal and vacation residents, Ms. Penman said.

She said that people are moving to Coconut Grove from the suburbs of Miami as well as from around the world. “We also have a lot of old-timers who have lived here for decades,” she said. “And we get a lot of relocaters, especially from New York City.”

Noting that Coconut Grove is a family-centric neighborhood, Ms. De la Rosa said that the new developments are bringing in a number of younger, affluent residents from various professions.

According to published reports, retired New York Yankees superstar/Miami Marlins baseball team owner Derek Jeter has a home in Coconut Grove. So does basketball legend LeBron James (who lives in Northeast Coconut Grove). Jorge M. Pérez, the developer of One Park Grove and the patron of the Miami art museum that bears his name, lives in the neighborhood, too.

Ms. Penman said that the revitalization of Coconut Grove, which began in 2016-’17, assures a bright future for the neighborhood.

“Since 2018, prices have been stable,” she said. “Right now, we have a lot of overpriced listings, some by as much as $1 million, so prices have had to be reduced and reduced. Because of this, these properties are staying on the market for up to 180 days or more. Properties that are priced right sell in 30 to 60 days.”

She added that it’s possible that prices will go up in the next five years. “It depends on the impact of all the new developments such as CocoWalk and Regatta Harbour,” she said.

West Grove, a distressed area of the neighborhood, also is getting a makeover: The developer, Metronomic, has plans for a mixed-use project that it is hoped will bring new life to Grand Avenue.

“Grand Avenue and its surrounding area are prime real estate,” she said. “Its walkability makes it highly desirable.”

Coconut Grove’s future is also dependent on fair weather. “Some of the Grove is in a flood zone as well, which makes some buyers reluctant,” Ms. Penman said.

Ms. De la Rosa, too, sees positive signs that Coconut Grove is on the upswing, noting that current projects are inspiring new commercial and residential development.

She pointed out that Alex Rodriguez, retired New York Yankees third baseman known as A-Rod, is moving the offices of his investment company, A-Rod Corp., which includes Monument Capital Management, to a 12,700 square-foot space at Coconut Grove’s Grove at Grand Bay.

She added that this is just the beginning and believes prices will remain stable in the short term and will increase in the next three to five years as all the new projects open. “Coconut Grove is one of the last remaining submarkets in Miami that will achieve appreciation,” she said. “And there’s positively room for more appreciation.”

Read the Original Article
Subscribe to The Grovite newsletter to get the latest news
Give it a try, you can unsubscribe anytime.