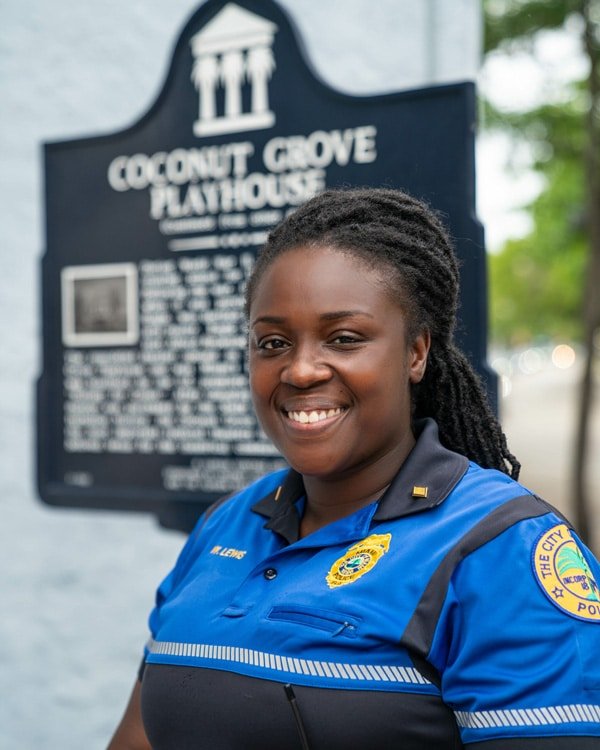 “Make sure you are good. And that your home is good, too,” is a frequent order Commander Weslyne Lewis Francois gives her officers, whom she sees as family — the way she also sees the community she serves in Coconut Grove, her “second home.”

After a career abroad in the military and community police work in Little Haiti and Overtown, Commander Lewis — also a mother of three — brings a nurturing touch to her leadership role in the Grove’s Neighborhood Enhancement Team. “I’m big on family and mental health,” she says. “The neighborhood I grew up in wasn’t getting the same resources as other areas of the city, and I’ve learned it’s important to give communities what they need.” 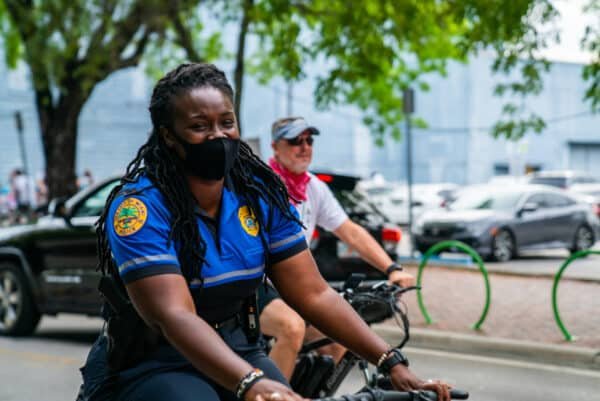 Commander Lewis’ first year as a City of Miami police officer handling the Grove’s needs was full of unusual challenges. The Covid-19 pandemic lockdown forced her to adapt to a new, shut-in normal for law enforcement and related city services.

“I believe in a family concept in policing,” says Commander Lewis — an approach that also helped her adapt in 2020.

Sometimes that meant zoom calls with HOAs or setting up elderly food distribution involving hundreds of meals per week. Other times, a variety of programs to boost the morale and health of the community — a socially-distant community bike ride, an outdoors movie night where she picked up the movie herself, or even an entrepreneurship program for kids in an open-air classroom — to name a few. “Kids started getting leery from isolation,” she says. “The entrepreneurship program came from conversations with parents on how to keep them focused.”

During her first year on the NET, Commander Lewis received a call to break up a scuffle between two 12 year-old boys who’d been arguing over a year. She intervened with some firm but nurturing advice. A week later, one of the boys came up to her and said, “Commander, we’re good now. I listened to what you said. We talked about it and now we’re back to being friends.”

“To have a kid understand conflict resolution within 30 minutes of a conversation is one less person who gets into trouble later in life,” she says. “Sometimes a police officer you can trust reaches a kid in a different way.”

Being part of the Grove resonates with the Commander’s island roots. For the Nassau native, raised in Miami by parents of Haitian descent, being part of Coconut Grove feels familiar. “I can relate,” she says. “I was raised in the Bahamas for a part of my childhood and here you have legacy families going back several generations. It’s another part of what I love about the Grove. Its history.” 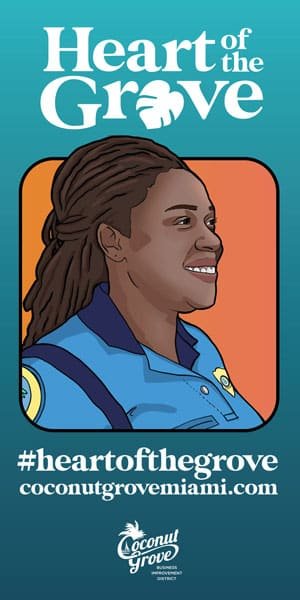 What is your passion?
Helping people and providing them with outlets and opportunities that were not available to me when I was growing up. This is what drives me at home and work.

What do they love about the Grove?
My favorite thing is the people — those who live here as well as visitors. From the little old lady who sits on the porch and tells her your story, or the business owner who got through Covid, or the tourist who wants to feel safe.

What makes the heart of the Grove beat?
Diversity. So much in a small town. Watersports, mom and pop eateries, arts and crafts, historic churches, lush greenery. Old and new businesses. The largest number of parks to walk your dog or have a cup of coffee with neighbors.

What is your superpower?
Resilience. It’s in every aspect of my life. My upbringing as an immigrant. Serving my country. Making it as a woman in law enforcement in a male-dominated profession. Breaking barriers. Not taking no for an answer when they said it couldn’t be done.