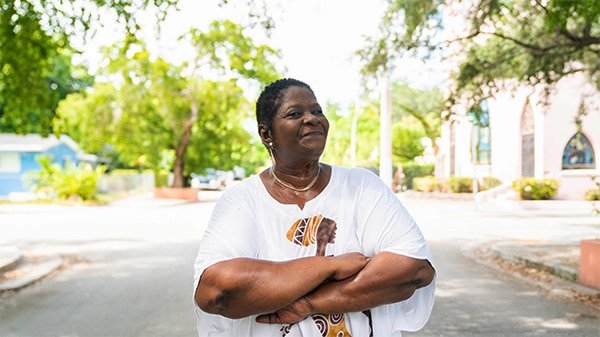 Linda Williams has typed thousands of words in her life, but the word she loves most is ‘hello’

Linda Williams loves to say ‘hello’ to everyone she meets — especially from her porch in West Grove. “Saying ‘hello’ opens windows of opportunity,” she says. “I want to know what we have in common to see what we can share.”

Born and raised in the Grove with Bahamian roots, Williams has been opening windows of opportunity for herself and neighbors for over six decades that span key historical shifts, including desegregation in the civil rights era. A mom of one now adult son, she celebrates a personal milestone this year — a 38th wedding anniversary with Alfred Williams.

Husband and wife together enjoy the simple pleasure of sitting on the porch and saying greeting passersby.

Her memories of childhood in the Grove are filled with sensory delight. “We ate lots of fruit from the trees,” she recalls. “From sea grapes to avocados and mangoes to lady finger bananas and guava.”

Today, she says, she can still count at least eleven trees on her property. “Kids literally ate off the land,” she says. “And now most won’t even touch a mango. My husband and I sit back and laugh. It was so filling!”

Williams fell in love with the keyboard

Raised by a single mom, Williams developed a strong work ethic early in life. By the time she attended George Washington Carver Middle School, Florida was evolving out of Jim Crow segregation laws.  “Those years were a turning point for everybody,” she says.

One summer, she took an elective in typing and got hooked on the clanking keyboard. “I was so excited about the typewriter!” she exclaims.

She also loved the feel of a swing carriage. “You had to push it back every line.”

“We started that course with a dozen or more kids and everyday it would dwindle off,” she remembers. “Then I was the only one showing up. The instructor asked: ‘Why are you here?’”

Her steadfast devotion to typing continued at Coral Gables High School where she had access to electric IBMs. “I loved the vibration of the keys under my fingers,” she recalls.

The late 1960s were formative as she grew into the role of entrepreneur. Over time, Williams made typing her profession by opening a secretarial service, Linda Types — a business she cultivated for decades.

“I got really happy and motivated with that skill,” she says. “I like typewriting. I worked with lawyers, doctors, librarians, teachers, students and families. I typed for everybody and anybody. Even myself! I even typed my own grocery list.”

For Williams, typing was not just rote copying but a way of understanding and connecting with people — clients trusted her. One day, she got a tempting offer to work full-time as a statistical typist for a criminal lawyer in Brickell. She downsized her company. Her staff found work at other agencies. “I made sure everybody was placed before I took the position,” she says.

By then, she was also taking care of her elderly mother and after a while, the stress of caregiving affected her ability to deliver at her standard of quality. She had a tough decision to make. “My mom was more important to me,” she says.

Williams had a great relationship with the attorney and some of their conversations about life stand out vividly. “I’ll never forget what he told me,” she recalls. “‘You don’t get the answer you want because you don’t know the questions to ask.’”

Those words shaped her approach to civic engagement. Her ability to network and help others was always about more than just typing.

“I’m not afraid to ask questions,” she says. “And I listen. I have patience with people. Doesn’t matter what walk of life they’re from. Whether they’re black, white, blue or yellow. If they find their way to me, share their issues, I’m not afraid of pursuing an answer for them, even if I’m not the end all.” 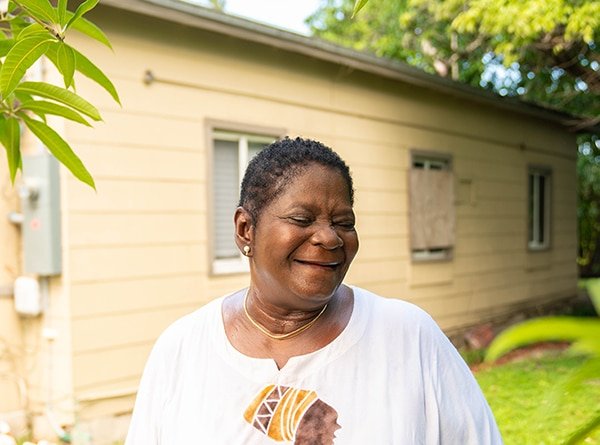 After resigning from the attorney’s office to care for her mom, Williams accepted secretarial work at Macedonia Missionary Baptist Church just two blocks from her home. “Somebody pulled up to my door and said they were looking for a secretary,” she recalls. The opportunity was literally a Godsend — she could walk back and forth to work while still tending to her mother. Williams carved that path for fifteen years until her last day at the church in 2016.

After her mom passed, Williams devoted more time to community advocacy for affordable housing and other local issues. Asking the right questions and connecting people to potential solutions, Williams says she became a go-to resource for neighbors.

“I try to connect the dots,” she says. “When I look back over my years of engagement, I see I’ve been a sponge for information. I take information and then bring that information where I see it can apply. When people come to me, I ask ‘when do you need it?’ — that lets me know how many hoops to jump through.”

In 2016, Williams worked with former Miami Mayor and Commissioner Xavier Suarez for a Coconut Grove beautification project called Adopt-A-Planter. She and her husband adopted one planter near her home. Williams encouraged young adults to invest their time in the project.

“I’m a big advocate of kids getting engaged in community service,” she states. “It builds an early outlook. Not everything in life is about getting paid! Helping neighbors and friends has its own rewards.”

Williams currently works part-time at Rebuilding Together Miami-Dade, where she also influences younger generations — one of her co-workers is over forty years her junior. “I remember when I was 23,” she says. “I tell her: ‘One day you will remember what the old lady was saying to me.’”

Typewriters have been replaced by silent touch screens and typing by swift swipes, but Williams and her husband still enjoy unhurried moments on the porch.

Williams met her husband in the 1970s when he worked as a meat-cutter at the Grove’s Winn-Dixie. They both share the same last name — a coincidence that made for easy flirtation.

“He knows meat like nobody else,” she claims. “He’s the BBQ guru. He’s the cook in the family.”

As they celebrate nearly four decades of marriage, Williams says he has been tolerant of her work ethic when she can’t say ‘no’ to people. “My husband says ‘everybody finds Linda,’” she quips. “When Alfred goes anywhere, he says ‘I’m Mr. Linda.’”

When they’re not saying ‘hello’ to neighbors, Williams and her husband love the simple pleasures of observing their surroundings and naming wild creatures. “We have a pair of iguanas called Mr. and Mrs. Green Jeans,” she notes. “My husband also once found three little owls sitting together and we named them Tom, Dick and Harry.”

A set of three squirrels, however, set the pace for the day. “Simon, Alvin and Theodore always run in packs of three — you can almost set your clock by them” she says. “Just after sunrise and before sunset they play and charge around the mango tree. It’s entertainment you can count on.”

What is your passion?
Caring for others. I also like organization and creativity. You should see my cupboards! I fold my linens all the same way. The typing role that I have in life has kept things organized so I can help others. It keeps me dedicated and committed.

What do you love most about the Grove?
I remember growing up when everybody knew everybody. You felt safe. People sat on their porches. That’s what I loved about it. It was quaint enough that you felt like family. When new families pass me now, I’m eager to say ‘hello, how are you?’ so they get the comfort that they can speak to that lady.

What makes the heart of the Grove beat?
The heart beats when there is unity and a common thread that we all can get on. We all have something in common. We don’t know what that is these days because we’re not talking to each other enough. It has to be that we listen more, share more and not be bitter. A lot of people are carrying things from the past. You can’t forget the past, but you can accept it. What can you do to get past the anger? Find a common goal of healing and striving for better. We have to find unity. A common thread that binds us. We have to grow that thread.

What is your superpower?
I think it’s my ability to listen. Patience. Lack of fear. I wasn’t born with fear. I’m never afraid to ask questions.