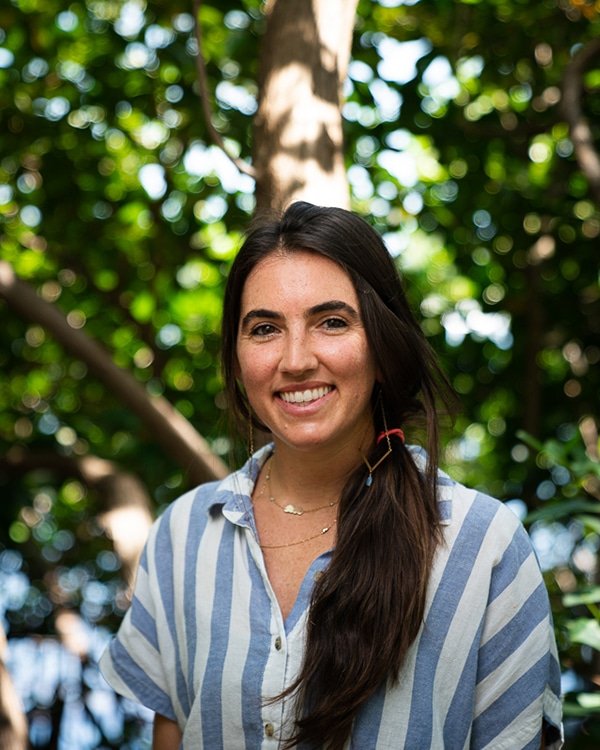 Caiti Waks has always had a connection to the sea.

“I’ve always been a southeast Florida coastal baby,” says Caiti Waks. The co-founder of Debris Free Oceans, now a mother of two and tireless advocate for healthier seas, became a Grove resident in 2018. Like many Grovites, she loves the trees — but her heart is happiest on the water.

Born in Stuart to first and second generation Floridians, Waks moved to Miami at age 11. Even before college, she knew that she would have a lifelong connection to the sea. “In high school, I started to discover the issues that were plaguing our oceans,” she says. “I decided I would dedicate my life to do something about them.”

The first step was a degree in Ecosystem Science and Policy, with minors in Philosophy and Art, at the University of Miami. One class about law and morality steered her into advocacy and changed her life. She had already done data collection in the field and lab research, but she felt pulled towards her heart’s calling.

“I realized my place in the ocean movement was more as a social person helping to inspire others to take action on issues coming out of the laboratory,” she says. “Laws are a reflection of our society. I wanted to be part of law making, which is also culture shaping.”

The next step was law school at the University of Florida, where Waks put her inspiration to work by helping establish a marine protected area in the Bahamas. Long Island has a small population, but the Gulf Stream — an international ocean current — deposits garbage from all over the world on its shores. “Working there opened my eyes to the world problem of marine pollution,” she says. “It was my first experience working with the local community and government. I took scientific data into consideration when helping to facilitate a best plan of action for everyone.”

One summer while in law school, Waks chose a cancer awareness bike ride from Baltimore to San Francisco instead of a traditional law firm internship. Long days pedaling on land helped Waks gather her thoughts for what would become Debris Free Oceans. “I had time to think about how I would solve the plastic problem,” she recalls. “I came up with a holistic platform to tackle it from beginning to end — where it comes from and where it goes.”

At the time, Waks admits, there were few organizations covering the breadth of the plastic problem in the way she envisioned. “I wanted to tackle the problem from education, research, policy and clean ups, working with many different sectors of society and how they could come to an agreement toward a common goal.”

When she returned to her final semesters at law school, she began crafting a business plan for the non-profit she co-founded with Saira Fida and now-husband Jeremy Waks, Miami-native and owner of Treehouse Miami. “We had a launch party at the club with reusable cups I bought at Goodwill,” she remembers.

While the matter is serious, sharing it socially can be fun — with some free beer. Cleanup pub crawls educate participants and businesses on the lifecycle of plastics and waste. Each person gets a reusable cup and perhaps more importantly, a sense of accomplishment — hundreds of pounds of litter prevented from flowing out to Biscayne Bay through storm drains.

Biscayne Bay is especially important to Waks, who is also the Program Director for The Herbert W. Hoover Foundation. Hoover was grandson to the famous vacuum cleaner manufacturer from Ohio. In the 1920s, he enjoyed childhood vacations in South Florida. Hoover fell in love and stayed in love with the bay his entire life, becoming a key figure in the establishment of Biscayne National Park in 1968. Hoover’s dogged environmental advocacy prevented the bay’s islands and waters from commercial exploitation. Waks helps carry out that legacy while curating initiatives that steward marine ecosystems and water quality.

Waks takes her boat out from Grove Key Marina multiple times a week. “I’m keeping a pulse on the plastic pollution problem,” she says.

Biscayne Bay may look blue on the surface, but its health has been deteriorating over the decades. Microplastics have ended up in baby sea turtle bellies and manatees have less sea grass to eat — they’re dying from starvation. The Gulf Stream is only three miles out to sea and brings plastic debris from the Caribbean to Miami’s coastline. On average, a Coconut Grove cleanup will collect over two hundred pounds of debris in a matter of hours.

Climate change has put further pressure on the bay. But for Waks, there’s hope in people. “Our mission is to inspire,” she says. “Giving people motivation to get involved is what we do. People can demand more to create a closed loop system with zero waste.”

Two specific people are front and center for Waks — her children, ages 2 and 9 months — water babies in the making, which comes as no surprise — Waks met her husband while they were both surfing in South Beach. “My little monkeys love the ocean! They are one hundred percent interested in the ocean,” she exclaims. “We take them out at least once a week. My daughter knows about composting. She knows to put trash in the trash can!”

What is your passion?
Inspiring others to get excited about saving the environment.

What do you love most about the Grove?
The big shady trees! I talk about it everyday. Sometimes I can’t believe it’s my real life. It’s so beautiful. I love it.

What makes the heart of the Grove beat?
The community. Its open-heartedness. People I run into are always so warm and kind. And everyone is so creative! Walking around my neighborhood is like walking around Burning Man. You might see a weird art installation, or a community basketball hoop that someone set up in a street, or a free little library. There’s always a surprise for you to engage in.

What is your superpower?
Limitless energy. The more I move, the more I have.

Pearl Meyer opened The Blonde Tulip twenty years ago and fulfilled her childhood dream of becoming a florist.

Pilates in the Grove builds a culture of health

'Not just about the reformer' -- Christa Gurka, owner of Pilates in the Grove, shares her story about building community aligned to health and wellness.