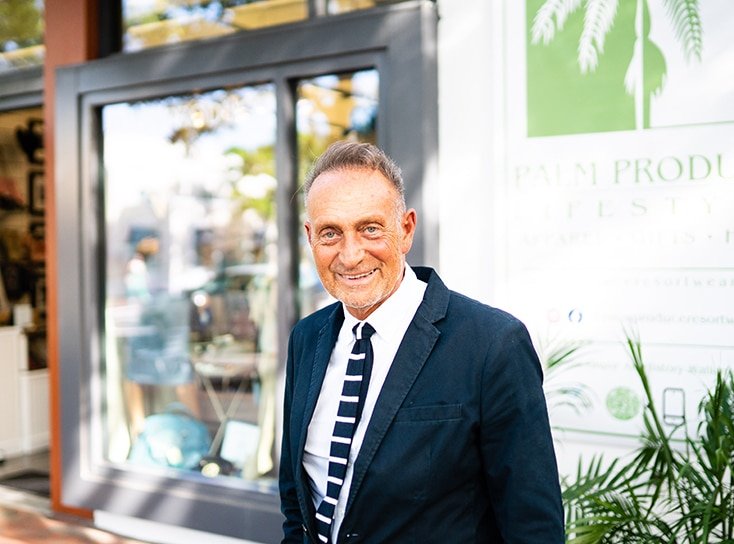 Stephen Licata thought he could live in the Grove — and he stayed.

Like many Long Island transplants, Stephen Licata came to Miami to get out of the snow, but also to get an education. Biking from the dorms at the University of Miami to Coconut Grove, Licata felt at home. “I remember thinking: ‘I could live here!’” he recalls. “It wasn’t oaks, but banyans. The village reminded me of Long Island’s North Shore waterfront communities.”

A pre-med major, Licata would eventually switch to business administration and marketing studies after attending a pret-a-porter fashion show. “I thought it was more fun,” he remembers. “I also spent a lot of time in the Studio 54 culture. People were putting together trends. I found a lot of inspiration.”

An entrepreneur at heart, “fun” for Licata turned into a decades-long career that started with part-time work in fashion retail during Miami’s tumultuous but famously stylish 80s decade. At 23, Licata headed the merchant’s association at Dadeland Mall. “I was so young!” he claims. “But people wanted a fresh look that wasn’t just all about the drug war.”

That new look was really pink. Licata, who began purchasing stores in the early 80s, established his most enduring one in 1984 — the same year “Miami Vice” made its debut on national television with lead characters Crockett and Tubbs wearing pastel linen suits and sockless leather loafers. A year prior, artist Christo had wrapped Biscayne Bay islands in pink canvas.

Pink Palm, Licata’s destination t-shirt and gift shop, came to life when pink was in the air. And he didn’t just read the room — he read the city. “The whole magic of Miami. The whole Art Deco, Vice and Christo era,” he remembers. “Everything was pink. ‘Green palm’ sounded less interesting.”

Always trend savvy, Licata got licensing for a “Miami Mice” Disney-like cartoon to print on t-shirts and merchandise. “It was the Grove’s heyday before Bayside Marketplace took off,” says Licata. “And ‘Miami Vice’ dictated fashion.” 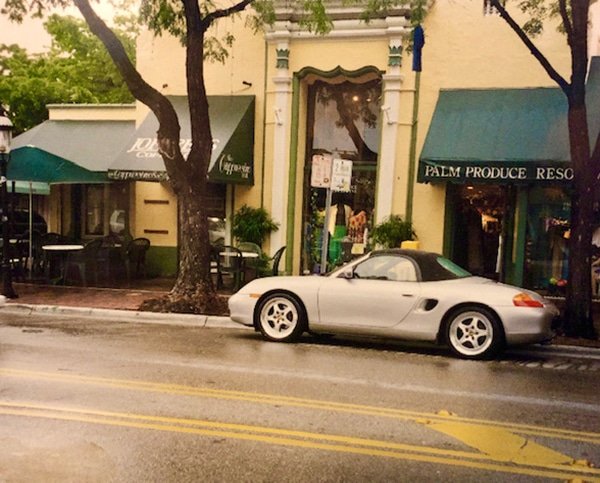 Licata and the enduring business model

Early on, Licata had seen potential as snowbirds migrated back to the Northeast for summer. “I noticed the business model,” he says. “People had stores in South Florida and the Northeast.” Licata and several business partners expanded Palm Produce ResortWear in The Hamptons in 1989 with five locations — one in each town — where he initially, and unapologetically, displayed pink flamingos.

Palm Produce ResortWear developed a loyal following and preserved a small shop feel, despite the growth. The mature iteration was no longer touristy, but kept a Florida twist. “We grew into a tropical store,” he says. “We got famous for our Hawaiian shirts, and cards, too. People would come in and buy $40 worth of cards.”

Today, post-pandemic, three stores remain in South Florida: Coconut Grove, Pinecrest and Key Biscayne. Over the years, the flagship Grove store has moved around the village — from Main Highway’s 1923 DeGarmo bank building, where H & H Jewelry currently operates — to Mayfair and Cocowalk and back again to a different storefront on Main Highway. But for the pandemic and CocoWalk’s remodel, Licata’s brick-and-mortar would have been continuously running for 37 years.

“In the COVID-19 era, I’ve had to condense,” he notes. “My business partners are planning retirement. Many employees have retired. But I do see expansion on the horizon.”

Merchandise has also adapted to temperature. “Not just fahrenheit, but cultural temperature,” notes Licata. “Hamptons have cashmere shawls and Miami has cotton cashmere. Key Biscayne has Brazilian backs and Pinecrest has one-piece suits.”

Over the years, Licata has also enthusiastically supported countless community events — especially those with artistic flair or characteristic Grove irreverence. He worked with the Coconut Grove Chamber of Commerce to develop the Banyan Festival and helped launch the Great Grove Bed Race. “I was always on marketing committees,” he recalls. 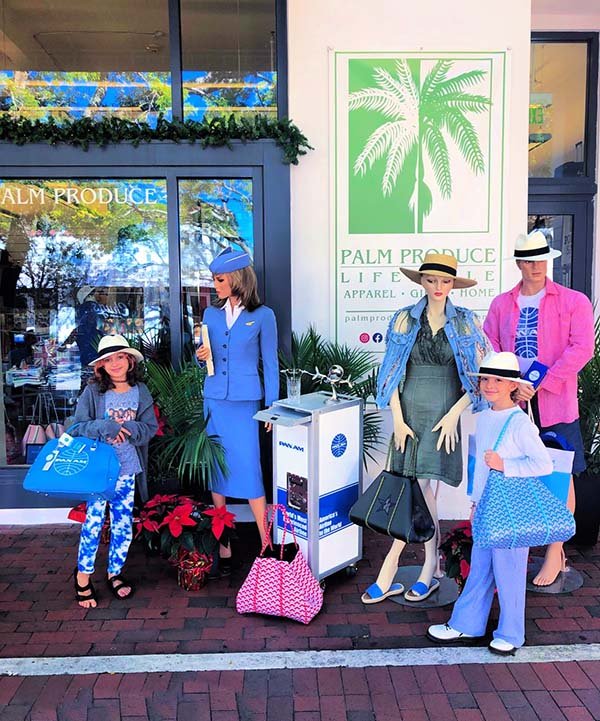 A passion for aviation

Licata not only founded one of the Grove’s most enduring boutiques, he also opened one of Miami’s most unique spaces — a store devoted to aviation history. “Every town has a founding father,” he says. “ How many people have an iconic airline born in their backyard?”

That airline — Pan American World Airways — flew seaplanes from Miami to international destinations from 1931 to 1945. The terminal, surrounded by former naval air base hangars, is today’s Miami City Hall.

Licata’s passion for aviation began in childhood on Long Island. His father, a Korean War veteran, had always wanted to be a pilot, but an eye injury kept him from flying. He became a doctor, instead, and flew in other ways — all of which sparked the young Licata’s imagination. “We would build kites,” Licata recalls. “We had telescopes. We were in our backyard often, looking up at the sky.”

Those memories came back to life in 2011 when Licata saw a Pan Am booth at a Las Vegas trade show though the airline had gone out of business in 1991. Licata’s life partner, Gailen David, who worked for American Airlines, wasn’t surprised. “Gailen told me airline collectors are serious,” he says. “They know everything. Anyone involved in the airline business loves memorabilia. Pan Am is an icon.”

At the time, Licata was already involved in the Business Improvement District’s first years and realized he’d been working near aviation history all along. “I learned about flying boats,” he recalls. “I didn’t realize just how much airplane history there was in Coconut Grove.”

That realization led to branding Pan Am bags and merchandise for Palm Produce. “Pan Am,” a short-lived but popular TV show that ran on ABC for one season, added to the retro airline fervor. To celebrate the show’s premiere, Licata hosted a party at Peacock Cafe with former Pan Am employees.

In 2012, Licata co-branded a store with David on the first floor of CocoWalk called First Flight Out. The space included a cabin, first class seats, fuselage and other airplane parts taken from an abandoned 747 in Opa Locka. Adding to the retail experience — an authentically attired Captain greeting customers who were eager to see a museum inside the store. Licata also hosted a special flight from Miami to Key West in collaboration with Pan Am brands. The Jetstream 31 was painted in Pan Am livery and recreated the original 1931 Pan Am flight — complete with a vintage menu.

“We were shipping tons of Pan Am bags,” says Licata. “For the next two Halloweens, everyone wanted to be a stewardess.”

First Flight Out was dismantled when CocoWalk closed for remodeling in 2019. Licata plans to reopen it in a new Coconut Grove location.

“The whole thing was fun,” he continues. “But it was also about Miami’s tremendous airline community. It’s a major employer. Everyone has a family connection.”

Licata still sells Pan Am merchandise at Palm Produce ResortWear’s Coconut Grove and Pinecrest locations. He also spearheads the Air History Project, a non-profit devoted to aviation history with a stake in the design of the new Regatta Harbour shopping and parking buildings. One of his dream projects, a mural about the history of Pan Am, would evoke the area’s rich aviation history.

Licata hopes to fill in gaps and contribute to place making, which he says, also helps the Grove’s economy. “Back when we had the store, aviation history was big,” he recalls. “The tourist buses would drop off people and I’d give lectures.”

“I think about my parents, too,” he says. “Who taught me how important it is to give back to the community if you’ve been successful.”

What is your passion?
Watching tropical sunsets and sunrises against a seascape of sailboats, and doing what I do in between — connecting with people, communities and charities.

What do you love most about the Grove?
The Mediterranean seaside feel, the romantic and exotic foliage, the cosmopolitan mix of residents.

What makes the heart of the Grove beat?
The people who choose to live here, each adding to the kaleidoscope that makes up the diversity of the community.

« Pastor Michael Bryant’s ‘heartbeat is the Grove’
Ms. Gibson, 95, has touched many lives »