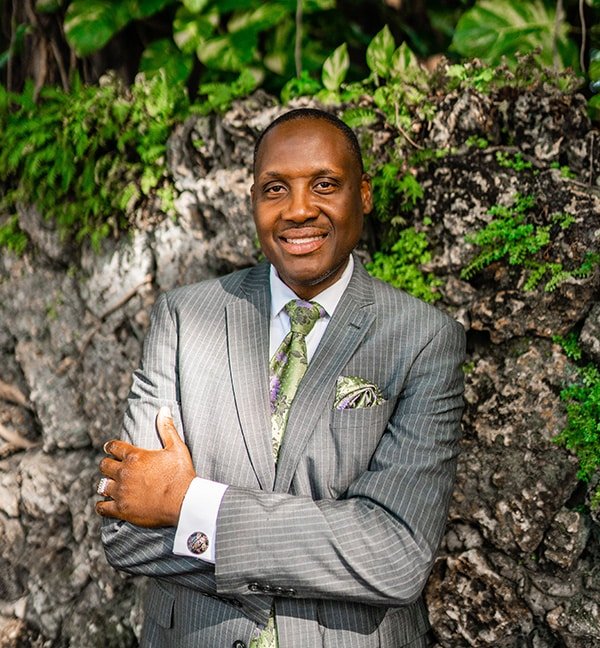 Pastor Bryant carries on a legacy of faith and service.

Third generation Grovite Pastor Michael Bryant lives and breathes Coconut Grove. “My grandparents left South Carolina and bought a house in the Grove,” he says. “I still live there.”

Born in the 70s and raised in the Grove, Pastor Bryant has been in service to others most of his life. Like many Grovites, he attended Coral Gables Senior High School, where he excelled not only in choir as a male soloist — he’s in the Music Hall of Fame — but also in academics and entrepreneurship. During his senior year, he opted for a business and finance elective with on-the-job training.

“My very first job was working at The Barnyard Community Center with Elizabeth Virrick,” he says. Virrick co-founded the organization in 1948 with Father Theodore Gibson to fight social injustice in West Grove.

Working with a legendary Grove activist set the tone for the rest of Pastor Bryant’s career path in education and ministry.

Ordained in 2001, Pastor Bryant stepped into the role of pastor earlier this year at Sweetfield Baptist Church, a West Grove congregation established in 1934. “One of the greatest accomplishments of my life is to be able to come back and pastor at the church I grew up in,” he says. “And I’m standing on some great shoulders, including Reverend J. L. Sanders.”

Other shoulders belong to elders who have inspired his lifelong devotion to community service. The first role model was family — especially his grandmother Clay Ella Godbolt. His parents, Mr. Richard Bryant, Sr.and Mae Bryant-Parker, encouraged him to embrace life’s challenges — “even to this day, in their memory,” he says. His grandfather, Deacon Mr. Willie Godbolt, Sr. “sparked in me a Godly principle.”

Even as a teenager, the young Bryant found inspiration in his peers. “I was always involved in church with younger people trying to help them succeed, making sure they stayed on task with education,” he recalls. “And after school, kids went to Barnyard. I was a counselor and homework assistant.”

That experience would eventually lead him to work with Miami-Dade Public Schools in 2001 after pursuing higher education. He earned a Bachelor’s in Theology and a Master’s in Counseling at Jacksonville Baptist Theological Seminary as well as a Bachelor of Science in Exceptional Student Education at Union Institute. 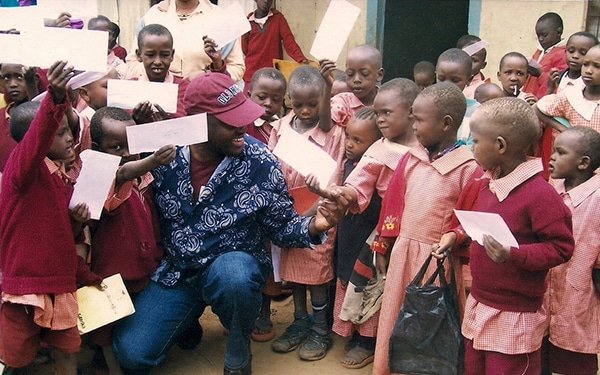 In 2008, Pastor Bryant attended a Kwanzaa Celebration in Atlanta where Missionary Janice Lewis invited him to become an ambassador to Kenya — an experience that changed his life.

As part of his ambassadorship, Pastor Bryant rallied sponsors to donate supplies to schools in a remote and impoverished area near the capital of Nairobi — supplies which he delivered himself.

“One of the things that really sticks out in my heart was that the kids didn’t have desks and they sat on the ground,” he recalls. “When they were asked a question, they would write answers in the ground with bamboo sticks, like paste in the dirt.”

“When we gave them pen and paper it was the equivalent of giving them the latest iPhone or tablet,” he continues. “The kids were jumping and yelling. They were so happy to have something to physically write with. I’ll never forget that.” 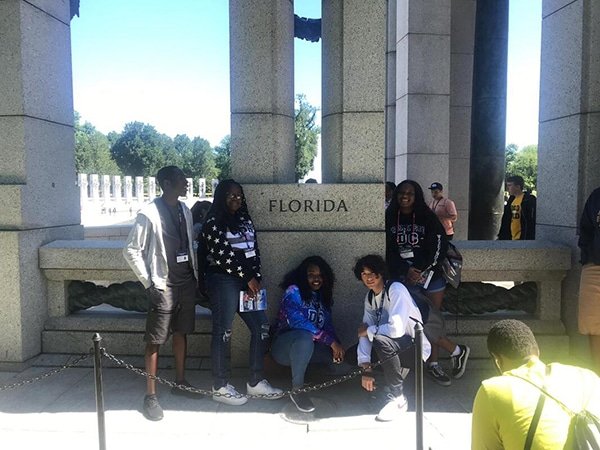 The Close Up cohort representing Florida in Washington, D.C. at the World War II Memorial, 2019. (Courtesy of Pastor Michael Bryant)

Soon after his return from the 12-day mission trip to Africa, Pastor Bryant founded Agape 4 Orphans International, a non-profit that helps at-risk children and young adults with disabilities and special needs prepare for life beyond the classroom. The organization recruits older children as volunteers to help their younger peers.

“This is dear to my heart. I recognize that some children don’t have access to resources,” he says. “It’s one of my life goals that all kids get treated fairly. I’ve been a catalyst to fill that void.”

Programs stemming from the organization include a Summer Enrichment Academy in Coconut Grove and special trips further afield. In 2019, Agape 4 Orphans took 11 students to Washington, D.C. to intern with former Florida Congresswoman Donna Shalala through the Close Up program. Two of the students represented Coconut Grove and served as keynote speakers in the closing reception.

The students also visited the National Museum of African-American History and Culture. “It was a big deal,” says Pastor Bryant. “One of the girls who walked into the museum was in awe and started to cry. All of us gave her a group hug.”

Since 2011, Agape 4 Orphans has also organized a beloved Christmas event that began at Sweetfield Baptist Church with about 50 attendees — a number that eventually grew into over 800. To accommodate more families, Christmas in the Grove now takes place in local parks — this year at Armbrister on December 11th.

“There’s no way I could do this without them,” Pastor Bryant says. “I wanted to do something that would be a blessing to kids and their families.”

It takes a village

Pastor Bryant says he feels blessed, too, as a black Grovite who grew up in the 70s and 80s with a family who helped him persevere in the decades after Jim Crow.

“I didn’t know about segregation,” he says. “My family kept me sheltered. For example, I would never have known that African-Americans weren’t allowed access to some parts of the Grove after dark. Grandma used to say ‘be in your house when the streets lights come on.’”

Despite the challenging realities he would become more aware of as an adult, Pastor Bryant appreciates his experience as a Grove son. “I’ve been blessed by lessons learned from past and present Grovites,” he notes. “This challenging history made me who I am today. I believe in unity. I love the diversity here.”

He also sees the African proverb — “it takes a village” — as a way of life. “We were raised as a village,” he recalls. “Family connections meant something. If you were caught doing something, people would say ‘I know your grandmother.’ But that also meant someone was caring for you.”

Firm guidance, says Pastor Bryant, is what children need. And like many of his West Grove role models, he has made a career of sharing resources in support of this need. A verse from the Bible inspires him to pay his blessings forward — For unto whomsoever much is given, of him shall be much required: Luke 12:48.

“Our kids are calling out for this attention,” he continues. “There’s a strong cry for someone to just love them and one of the things that I hope for in my life, that if I could touch someone, then my life wouldn’t be in vain.”

What is your passion?
People. Sharing. Giving of myself. I’m passionate about the needs and concerns of children. How can I make this a better place for those coming after me? Any division fuels me to make this community a better place.

What do you love most about the Grove?
Its character. The close-knit community that we once had. I love knowing that my grandparents, who without a high school diploma or college degree, were able to become homeowners in the Grove. They were able to come into this community and live well. No six-figure job. I love it because I am standing on their shoulders.

What makes the heart of the Grove beat?
The landscape, the greenery, the beautification of this little paradise that we live in, the brilliancy of the architecture and design, the historical sites, being close to a waterfront and of course, the people. My heartbeat is also Coconut Grove.

What is your superpower?
God. My gift of discernment. To make a spiritually conscious decision on behalf of the people I’m in contact with.