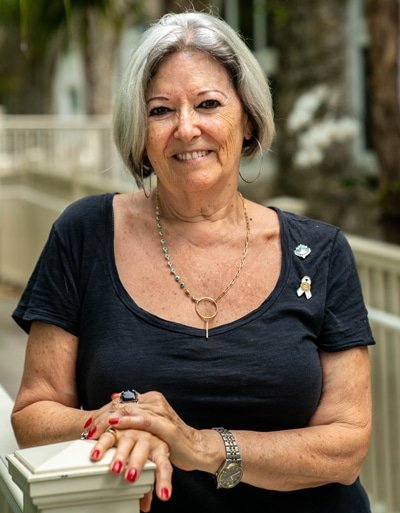 “Who can complain about the weather?” asks Virginia Yermoli about life in Coconut Grove. The Argentine native, who came to the Grove via D.C. and Montreal in 2002, soon learned there was more to the city than year-round warmth. A diplomat’s daughter, she had seen the world in broad strokes. An arts educator, she was always drawn to culture. When she and her husband looked for a sailing town, the Grove and its “vibe” fit the bill. “History, art, wackiness and being next to the water,” she recalls. “We fell in love.”

And there was a lot to love.

“The art, culture and wackiness. One of the first things I joined was the King Mango Strut parade,” she says. “It just really appealed to my sense of fun and satire.” The Coconut Grove Arts Festival was also attractive to her Bohemian side: “There’s no other place that combines art, history and multiculturalism the way Coconut Grove does.”

Life in the Grove has certainly been a mix of all her favorite things.

A legacy of service 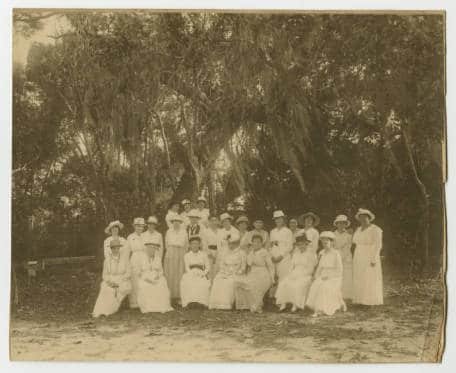 Yermoli’s love of history came to life when she joined The Woman’s Club of Coconut Grove in 2014. Founded in 1891 by pioneer Flora McFarlane as The Housekeepers’ Club, the organization is still actively devoted to community service.

“We’re older than the city of Miami,” she says. “When I became a member, I realized how rich in history the Grove is. I started reading everything the club has done and it was mind-boggling. The archives team is incredible.”

Woman’s Club members in the past fought to preserve the Everglades for future generations. Today’s members face a modern battle — the elimination of single-use plastic — as a legacy of care for Florida’s unique wetlands. “We’re helping to pass legislation,” she says. “It’s so important living near the bay where animals choke to death. These things are very important to our community and we really push hard.”

Yermoli became president of the club in 2018 and is currently finishing a second, final term. Under her tenure, the Woman’s Club tackles problems their forebears would have never known — helping educate the community about human trafficking and HIV prevention, to name a few — but with no less grit than the ladies in petticoats.

The Covid-19 pandemic hasn’t deterred their resolve. “This organization went through so much,” Yermoli notes. “Two world wars, a depression, the 1918 pandemic. We weren’t open this past year but our committees worked hard.”

Club founder Flora McFarlane became Miami’s first teacher in 1889 at the Coconut Grove Schoolhouse. Today, the Woman’s Club follows in her footsteps with education projects, one of which resonates deeply with Yermoli’s love of the arts.

For the last twenty years, the Woman’s Club has awarded thousands of dollars in grants to local high school students for their art studies after graduation. A curated show, competition and exhibition have all become an exciting annual event for Grove parents and children.

Enthusiasm for the arts didn’t wane during the pandemic.

“There was a line of people all the way out to McFarlane Road for the exhibit,” she says. “I was incredulous! All these people came during the pandemic. And the talent? Mind-blowing. We even had fashion designers this year. The stuff is magnificent.”

Though Yermoli will step down as president this year, there’ll always be a frontier spirit for members of the Woman’s Club as the Grove continues to evolve.

And no complaints about the weather, definitely. 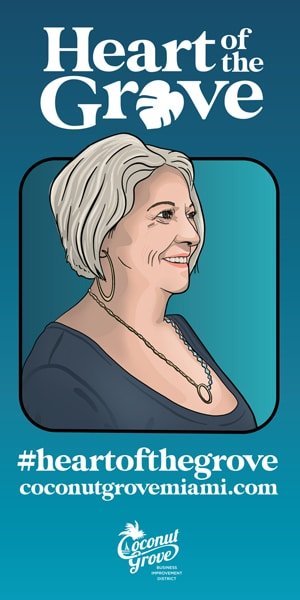 What is your passion?
History and culture. In all the places where I’ve lived, I’ve always tried to absorb as much local culture. You want to be part of that history.

What do you love most about the Grove?
Its people. The quality of the people, the friendliness. I was raised in the 60s and there’s a lot of that here — a Bohemian hippie kind of vibe that I really like. Its creativity people. At the intersection where I live, someone once put stones painted with smiley faces under a tree. Somebody took the time to do that. How cool is that?

What makes the heart of the Grove beat?
I would say its people. People here are so invested in maintaining the Bohemian character of the Grove.

What is your superpower?
Convincing people to do things that move the community forward. I’m a strong spokesperson for the things I truly believe in. I believe in what this community has done and what it has potential to still do.

Ms. Gibson, 95, has touched many lives

Ms. Thelma Gibson, nurse and trailblazing community advocate, has helped shape the heart of West Grove for nearly a century.

Ruth Ewing is the ‘fairy godmother’ of Virrick Park

With family roots tracing back to Bahamian settlers, Ruth Ewing is devoted to the care of a West Grove park and the children it serves.