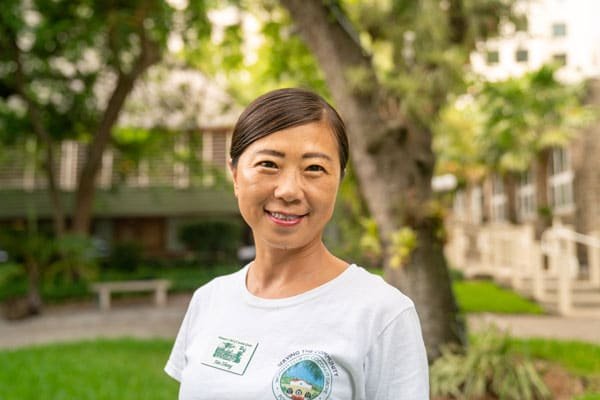 From China to America, Fan Zhang’s path to citizenship is filled with good food and good causes.

“Coconut Grove gave me the feeling of home,” says Shanghai native Fan “Helen” Zhang.  But getting to “home,” as with many a Grovite, is a journey that often begins on far away shores.

In 2008, Zhang was working in the financial sector when she met her husband, architect James Jenkins. The indefatigable Zhang, who’s always been curious about the world, had already run her way through it as a marathon enthusiast — from Australia to Amsterdam and Greece to Canada.

She had also lived in London for six months to study English while she worked for a British firm. “I had culture shock! The United Kingdom is so different from Shanghai,” she says. There’d be more adventures spanning continents, including a wedding in Las Vegas with both American and Chinese families present to celebrate.

The newlyweds moved to Coconut Grove in 2015. Zhang began to acclimate in ways that came naturally to her — running under the lush canopy of trees and volunteering, to name a few — all of it a welcome respite from the busy, corporate life she’d known in China.

But it was in China, however, that she had her first real taste of American culture.

One November, a bar owner who catered to homesick expatriates was in the weeds when her chef left town. Zhang’s curiosity about food meant she was already familiar with Shanghai’s American grocer, so she volunteered to roast a Thanksgiving turkey. “I’m a big fan of Jamie Oliver. I made the recipe,” she says. “Since then I’ve made a turkey every year.”

Today, Zhang runs a Facebook group where she shares stories about her daily cooking. She also enjoys the diversity of international cuisines in the Grove — from Argentine BBQ to Peruvian ceviche. At home, she has explored grilling a Southern beer can chicken or baking a tropical mango flan.

“I like to challenge myself. That’s why I run marathons. I try to outdo myself,” she says. “Never stop learning, food-wise, always try to learn something new and difficult.” 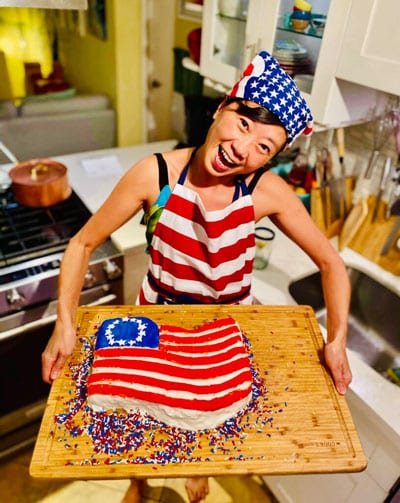 A sense of urgency during the critical early months of the Covid-19 pandemic motivated Zhang to take the American citizenship test sooner rather than later. She and her husband agreed there wasn’t any time to waste: “Let’s do it!”

To prepare, Zhang diligently studied a broad range of subjects — from the Civil War to civics and more. “One day, it started coming together for me,” she says. “The Constitution made more sense. No one is above the law.”

She became an American citizen in February of 2021, with plenty of time to prepare for her first July 4th Independence Day. Zhang celebrated by baking a cake honoring the Betsy Ross flag. The 13 stars and stripes represent the original colonies that fought for independence during the American Revolutionary War.

A sense of belonging, however, grew from her tireless devotion to Miami causes — not just a green card. Volunteering transformed her life. “It’s really changed the view of the world for me,” she says. “Shanghai is a money-oriented place. Here we live a simpler life and I have more time to contribute to society.”

In the last four years, Zhang has gotten deeply involved with The Woman’s Club of Coconut Grove, where she’s currently finishing a four-year tenure as Second Vice President and Membership Chair. “We have so many committees doing a great job on human trafficking, the environment, communication and fund raising,” she notes.

Working with Woman’s Club President Virginia Yermoli, Zhang and the nearly 200 members have their hands full. “Virginia and I in the last four years, we work like crazy,” she says. “There’s something every week. Events, fundraising and 12 committees. It’s huge. As officers we completely support the committees and maintain the building.”

Zhang has also been volunteering at the This ‘N That Shop twice a month since 2015, and has contributed to other organizations, including the Coconut Grove Sailing Club.

Every morning, Zhang’s stamina revs up early when she runs up to six miles, but not without pausing to take photos of the sunrise at Dinner Key or working out at Kennedy Park. “It’s the most beautiful gym in the world,” she says. “Outdoors, with the ocean breeze.”

In spite of all her running around, one thing’s for sure — Zhang and her zest for the Grove are here to stay. “I don’t want to move anywhere else,” she says. “I love the community. I run into neighbors, who are like family.” 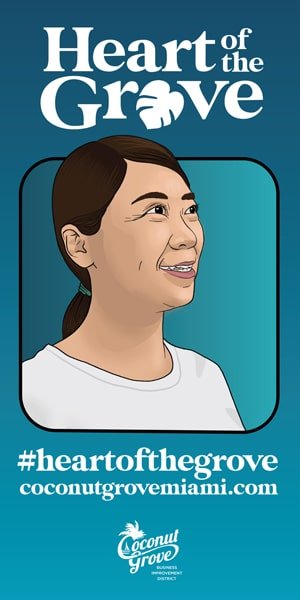 What is your passion?
My passion is to lend a hand.

What do you love most about the Grove?
I love the trees. I love the people. I love the activities — there’s always something happening.

What makes the heart of the Grove beat?
The Grove has a very rich history, and people from different countries who feel at home in Coconut Grove. The Grove always welcomes different cultures. It’s got an open mind and open heart for everyone from all over the world.

What is your superpower?
I always challenge myself to learn something new.