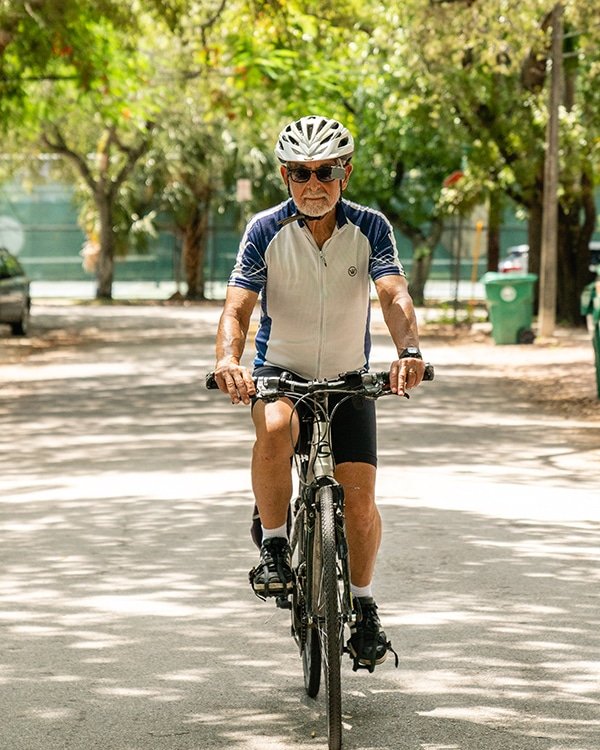 “Why did we wait so long to live in such a great place?” is a question Hank Sanchez-Resnik remembers he and his wife, Lucienne, asked themselves when they moved to Coconut Grove in 2013. The couple had lived in cooler climes — Berkeley, California and Paris — but Sanchez-Resnik’s other half, who is Afro-Cuban, longed for warmer weather.

Warm weather wasn’t the only appeal. Sanchez-Resnik, a multifaceted man in the media arts, has worked as a writer, journalist and filmmaker. “In 1978, I wrote a book on a computer that took up a whole room,” he says.

But one passion has literally steered his life — bicycling. Hitting bike paths under the tropical sun would also suit the vocation.

A trail that was barely there

“I started bicycling in 1967 when I lived in Manhattan,” he recalls. “I was a freelance magazine writer then and wrote an article for The Atlantic called ‘Passion on a Bicycle.’ No one was riding a bicycle in New York City then. I just thought there’s gotta be a better and healthier way to get around the city. Buses and trains are too enclosed.”

In 2005, the couple rented a home in Key Biscayne for nine months. This first taste of Florida living across the bay from Coconut Grove would help Sanchez-Resnik identify needs in the Miami bike scene. He had already had copious experience as a bike advocate in Berkeley. “I wanted to get my teeth into something,” he says. “I went to the county bicycle-pedestrian planner, and I saw the Commodore Trail had been on the books since 1969.”

Sanchez-Resnik biked to Coconut Grove frequently, and had noticed how some of the Commodore Trail disappeared into the shoulders. “It was crazy,” he says. “Some of it isn’t even a trail. I wanted to make Miami safer for bicyclists.”

The rides to Coconut Grove eventually became rides from. After years of living in between Florida, Berkeley and Paris, and seeing their adopted children settle into adulthood, Sanchez- Resnik and his wife set down roots in Coconut Grove.

“I consider myself an imposter after only eight years,” claims Sanchez-Resnik. “Others have been in the Grove for decades!” 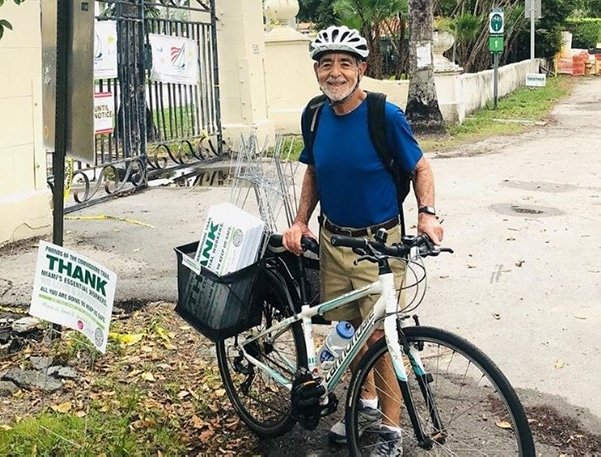 Hank Sanchez-Resnik installs signs thanking users of the Commodore Trail during the beginning of the Covid-19 pandemic in 2020. Coconut Grove, Florida. (Kevin Arrieta/VACO)

Sanchez-Resnik and the Commodore Trail

And yet, what commitment in just eight years: Sanchez-Resnik has become a tireless leader for bike safety. Since first arriving in Florida, he has founded four different nonprofits that focus on bicycling and walking in Miami-Dade, including Bike Coconut Grove, which often offers bike valet service at Grove events and gives students an opportunity for community service.

Working with government officials, Sanchez-Resnik has seen victory and defeat. After one such let down, he received an email from none other than Mary Munroe Seabrook, great granddaughter of Commodore Ralph Munroe, one of the Grove’s founding fathers and namesake of the beleaguered trail Resnik had first fallen in love with.

“I got an email from this woman saying the Commodore Trail had a lot of history,” Sanchez-Resnik recalls. “She asked me to do something about it.” The correspondence started out slowly, but eventually, they co-founded Friends of the Commodore Trail, a non-profit dedicated to the preservation and improvement of the historic five-mile trail between Alice Wainwright Park and Cartagena Circle at the Gables Waterway bridge.

Sanchez-Resnik says he’s inspired by Jan Gehl, the city planner for Copenhagen, in creating an infrastructure where parents and young children can bike safely. “That’s our hope for the Commodore Trail,” he continues. “For people of all ages to be comfortable and safe while enjoying a scenic ride that connects all kinds of wonderful things in our community. It will be a treasure. Now it’s a diamond in the rough.”

Many miles yet to pedal

“The Grove has the potential to be an ideal neighborhood for bicycling and walking,” says Sanchez-Resnik, “and a model for the City of Miami.”

Looking forward, he hopes to spend less time on the keyboard and more on the road — doing what he loves best. “I have commitments that keep me from doing the 100 miles I want to on my bike every week,” he says. “I usually bike out to Key Biscayne or down to the Deering Estate several times a week. Sometimes to the beach.”

What is your passion?
Bicycling!

What do you love most about the Grove?
The people I know in the Grove. I’ve met a lot of great people here.

What makes the heart of the Grove beat?
The sense of continuity from past to present to future. This is a dynamic place that has a really clear sense of identity and cherishes that identity. It is evolving all the time but is rooted in a proud past.

What is your superpower?
My work ethic. I work really hard and I generally love the work I do. It keeps me going. There’s a downside: I border on being a workaholic and I really have to watch that!