Minty Z serves up love in plant – based eatery 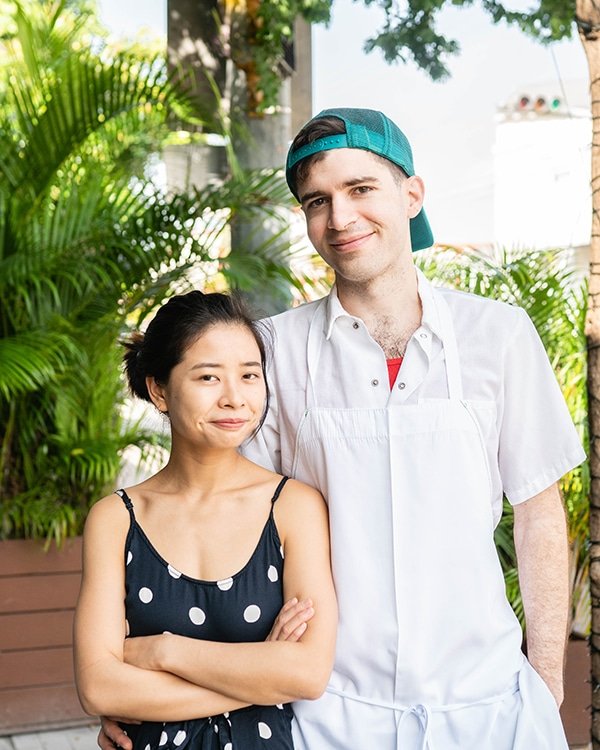 Minty Z founders fell in love with the Grove

“We fell in love with it,” says Alex Falco about Coconut Grove.

The “we” is the husband and wife team, owners of Minty Z, a vegan Asian-fusion restaurant in the Grove specializing in dim sum. “Minty Z” is short for Huimin Zhu, Falco’s wife, a Chinese-American whose grandfather and uncle are dim sum chefs in China.

How Falco and Minty met and how they came to Coconut Grove is a love story, too.

The New York City expatriates, who’ve been vegan a combined six years, met online in 2018 and married six months later. Minty had worked as a bartender and Falco as a chef and restaurant professional for acclaimed restaurants.

Marriage hasn’t been the only major life change in Falco’s life this past decade. “I was going through a phase to feel better about myself and get healthy,” recalls Falco. “It wasn’t just about weight loss. The restaurant lifestyle can be grueling.” After trying keto, paleo and vegetarian lifestyles, he settled into plant-based eating. “When I figured it out, I felt better than I ever had.”

A change of scenery

The newly-married couple longed for a change of scenery and moved to Florida in 2019. Their first business idea, a lagniappe food truck on the patio of an art gallery downtown, fell through when the gallery’s lease wasn’t renewed. Another challenge was on its way — the pandemic, which early on put the restaurant industry in limbo. By the late summer of 2020, the couple started selling food at the open air Coconut Grove Organic Market. “We fell in love with Grovites,” Falco says.

Soon after, they spotted an empty restaurant space on Grand Avenue for rent. New York investors and family who had faith in the team helped them open six months later. “Minty Z was almost turnkey,” says Falco. “The kitchen was fully operational. We ended up investing a lot less.”

Opening a business in the middle of the pandemic had an unexpected benefit. “We were more fortunate than people who opened right before, or restaurants that were operational before,” explains Falco. “We didn’t spend during the worst of 2020.” 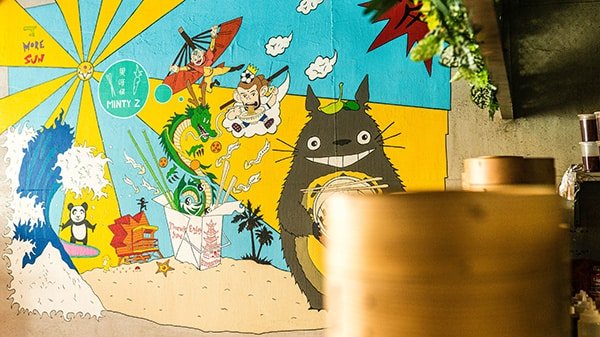 Minty Z for pancakes and patience

Grovites seem to have fallen in love with Minty Z, too — a relationship that started in the farmers market. “It translates into the restaurant,” says Falco. Since opening, Falco notes that many locals come in at least once a week for their favorite dishes.

“One gentleman comes every Saturday before we open to get matcha pancakes with no toppings,” he says. “As soon as we see him, we get his pancakes ready.”

Although they sometimes miss the seasons, Falco says he and Minty have enjoyed Grove’s warm reception.

“I think people love the fact that we’re young people making food they believe in,” he says. “Coming from New York City that was a nice thing for me to see. Diners in New York can be quick to pass judgement and be inpatient. Grovites are more understanding.”

They’re also curious. Not everyone who eats at Minty Z is vegan or vegetarian. With other plant-based restaurants in the Grove, and this year’s SEED Food and Wine Plant-Based Festival at Regatta Park, Falco sees momentum in plant-forward living. “I strongly believe plant-based dieting is not a fad,” he says. “The Last Carrot has been around since the 70s, then there was Choices Cafe. The Grove is conscious about the environment and animals.”

Life outside the kitchen

With Falco as CEO and Chef and Minty running front of house and making drinks, free time is limited — they spend most of it in the Grove. In 2020, the couple moved from Edgewater to the Grove not just for convenience but because of the Grove’s less touristy and more neighborly vibe.

“People suggest Wynwood or South Beach, but we like it here,” he says. “We enjoy eating at other local restaurants and supporting them. We’ve met many fellow business owners. We like to hang around.”

What do you love most about the Grove?
The people, for sure. They’re friendly, conscientious. I love this community.

What makes the heart of the Grove beat?
I don’t know if I’ve been here long enough to answer that.

What is your superpower?
Understanding people and putting myself in their shoes. Understanding what motivates people.