Monty Trainer has loved ‘every minute’ 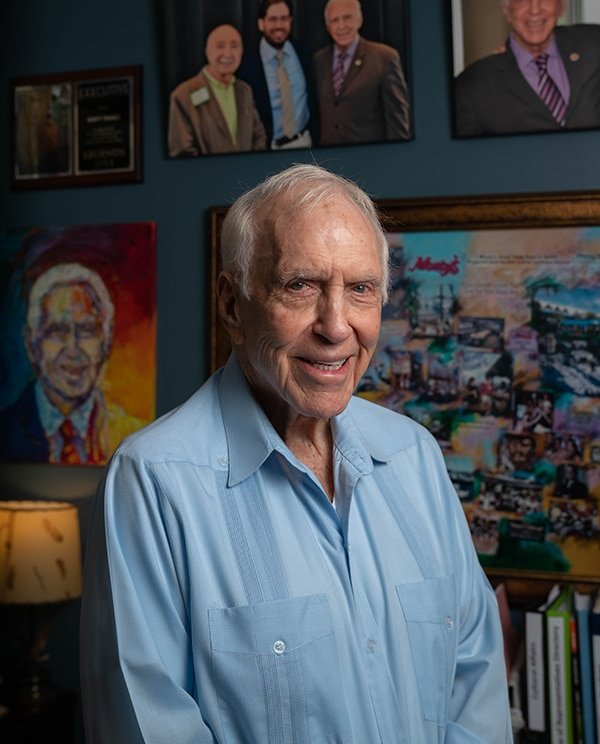 When asked how he got to the Grove, Monty Trainer quips, “by car.” The younger Monty, fresh out of Gainesville in the early 60s with a degree in Public Administration from the University of Florida, may not have foreseen what that ordinary journey down I-95 would mean, decades later, when he’d be known as “the Grove Father.”

Raised in Key West, Monty has always been passionate about coastal living — a love for the sea that ran in the family. His mother was born in Key West and his father in Maine. “Yes, it has to be water,” he says. “As a kid I was always in the water. Water has always been a big part of my life.”

By the time Monty arrived in the Grove, he had already earned his chops in politics and business during the Gainesville years, where he worked on a governor’s race. “I was a connector,” he remembers. “A facilitator. I liked to help people.”

One of his first ventures in the Grove was establishing the eponymous waterfront restaurant off Bayshore Drive.

“I used to have breakfast at a little luncheonette on the bay close to City Hall,” he recalls. “One day, the owner asked me to help negotiate the extension of his lease.”

Monty ended up buying the lease with a small down payment and extended it even further with its original owners. The risk paid off, but not without sweat equity. He and his staff built out and ran the restaurant while also building the marina. “We’d close up and work at night. It was a moonlight construction,” he says. “It took five years.”

More than just a restaurateur

Owning a restaurant meant that Monty could host meetings for local non-profits or aid their endeavors with in-kind donations. But even after he left the business, Monty would impact the Grove and South Florida by engaging with dozens of charitable causes.

In the early 80s, when Miami was struggling to overcome its image as the drug war’s cocaine capital, Monty worked arduously to win bids for the Miss Universe and other renown pageants — all of which were broadcast widely on television. “We raised over $2.5 million for Miss Universe,” he remembers. “It was an expensive proposition but we got community support.”

Monty has also been involved with the Big Orange Drop in downtown Miami, as well as Dade County Days in Tallahassee, when a giant paella feeds over three thousand people, including state legislators, commissioners, students and constituents. “Food becomes a common denominator at the state capitol,” he says.

Monty has ardently supported many other organizations, including the Golden Canes Club, a fundraising arm of University of Miami athletics, and Recording for the Blind and Dyslexic. He has also served on the Boards for the Miami Dade Cultural Affairs Council and New World School of the Arts for fifteen years.

Now in his later years, Monty still works as President of the Coconut Grove Arts Festival, a major annual event that took a break from its 58 years of running during the pandemic. As a non-profit, the art festival offers various education programs throughout the year, and has awarded hundreds of scholarships since its inception in 1963.

Monty’s involvement started gradually in the 70s when owning the restaurant afforded him the opportunity to support. At first, he was a program sponsor, then in-kind donor. Over time, he joined the board and eventually took on full leadership.

“The art festival, the Playhouse, all that was the Grove at the time,” he recalls. “It was always known as the ‘art village’ of Florida. I really gained an appreciation for art and artists. They made money, but it was a labor of love, too.”

The juried, three-day festival, which will boast nearly 300 artists and a culinary arts pavilion in 2022, culminates Monty’s belief in the power of art to connect people. “Through culture you can intertwine so many things — even more than in sports — things blend in and work. I’ve been fortunate to be part of these situations.” 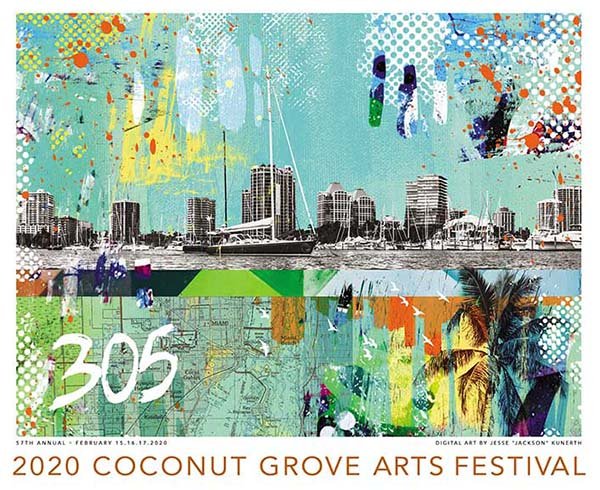 Monty, who works at festival headquarters at Mayfair in the Grove, remains tireless, taking a cue from the artists he’s met over the years: “if they didn’t love what they do, they wouldn’t be doing it.”

A lifelong bachelor and father of a son, Monty says “he’s married to the community” — the village he arrived at “by car” over five decades ago. Monty has received numerous awards for his charitable work. In 2010, a group of Grovites threw him a birthday party where a poster and cake, playing off the classic movie, called him “the Grovefather.”

In recent years, the Grove Father has sought to reconnect with his own, at least in memory. Monty has taken his boat up to Maine to visit his father’s birthplace in Bar Harbour, where he owns a small inn. But the Grove is always home. “I have loved every minute of my life in the Grove,” he says.

“People ask me ‘why do you stay so involved in the community?’” he continues. “It’s all because of the arts, because of my background. You do these things as long as you love them. As long as I can continue to do it, I’ll do it.”

What is your passion?
Doing what I do as long as I can do it.

What do you love most about the Grove?
The water and the vegetation, the lushness of it, the feeling. I used to go to Colorado every winter but it didn’t have an ocean! The park system — the most beautiful park system in forever. We’ve put art in the parks.

What makes the heart of the Grove beat?
Change. The Grove is now perceived as a laid back restaurant area and that perception is reality. It’s a great thing to walk in the Grove on weekends and see every restaurant is packed. You can sit on one end of Commodore and look up and see every seat is taken. The virus helped the take-out and outdoor dining experience. Every restaurant is outdoors. It’s so attractive for everybody.

What is your superpower?
I like to be in a position to help people attain their goals, no matter how miniscule, for a good cause. I’m a facilitator.